Even before the wildfires in Banff started, the locals knew they were coming. We had just taken a relaxing dip in Radium Hot Springs at the south end of Kootenay National Park, after which we bought some snacks in town and I gave in to my bad habits and bought my first pack of Canadian cigarettes. As I lit one on a bench located on the boulevard between the filling station and the road, a small gas station attendant came frantically toward me. “If you’re going to smoke there, be very careful” she pleaded. “We have a small ashtray on the pavement you could use instead. We are very worried. Storms are coming.” “I understand,” I told her. I relocated myself outside the station.

Then, on our drive back into Kootenay, we noticed the fire danger sign now read “EXTREME”. This was a strange sight indeed, as I’ve never seen a Minnesota fire danger sign exceed “Moderate”. Sure enough, that night, as cracks of thunder echoed over the blazer where we were camped in Kootenay National Park, a burst of lightning started a wildfire near Sunshine Village Ski Resort, not 30 miles from where we slept. Fortunately for us, we had only just finished our hike to Egypt Lake. All the trails we had explored for the past three days were hereafter closed due to wildfire. 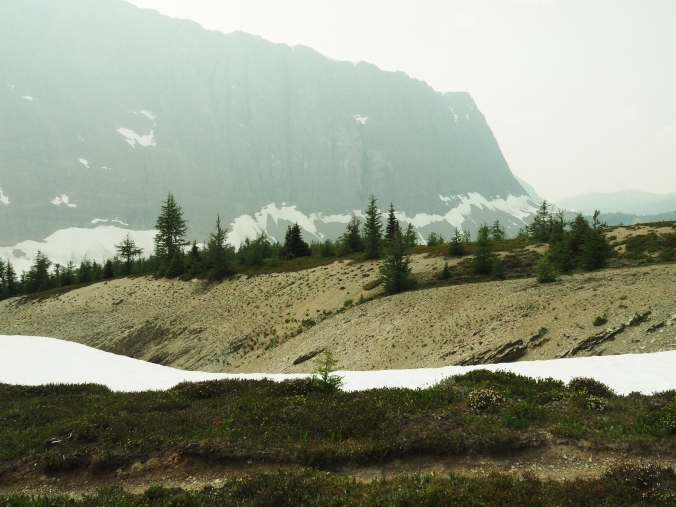 Most of my Rockwall Trail photos are shrouded in smoke