Yellowstone is significant because it became the nation’s first National Park in 1872. The land was chosen because of its mysterious thermal features and other natural wonders.  When you think of Yellowstone, you probably think of geysers such as the famous Old Faithful. And indeed—such features are truly wondrous and the main thing that most people come to see.  The real value of Yellowstone, however, is its wildlife. The Greater Yellowstone Ecosystem is large and wild enough to allow for a diverse ecosystem to survive and thrive.  In fact, it holds the highest concentration of wildlife in the lower 48 states.

We spent our first two days in Yellowstone in the backcountry, leaving from Blacktail Creek trailhead and hiking along the creek and then the Yellowstone River. The Yellowstone backcountry is a very peaceful and refreshing place; we ran into more marmots than humans.

For the first few miles of our hike, we crossed a prairie where we were delighted by numerous wildflowers as well as Uinta ground squirrels darting to and fro. 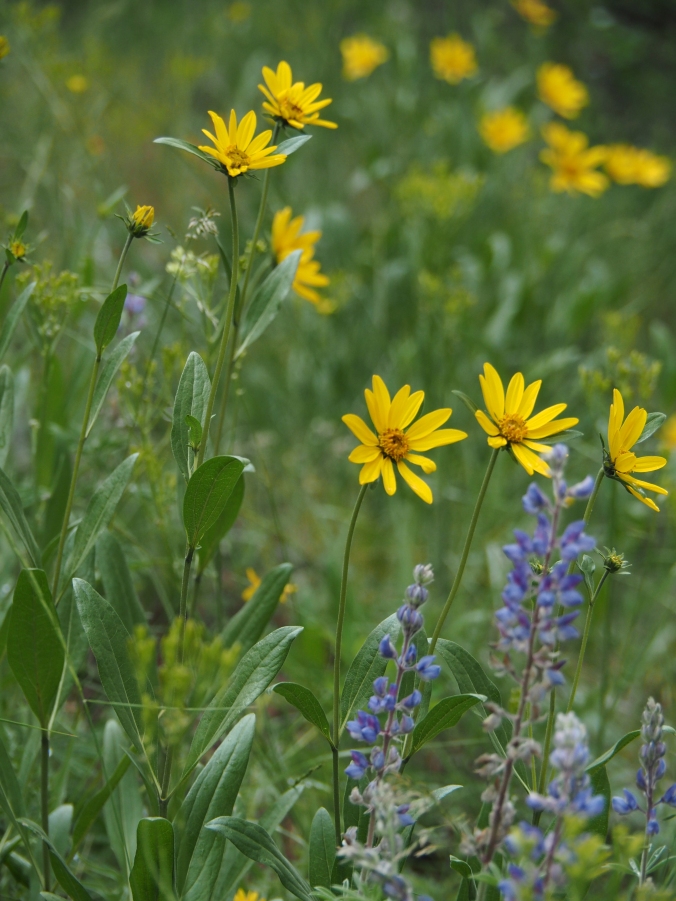 After hiking along the creek for a couple more miles, we headed downslope to a suspension bridge that crossed the Yellowstone River.  Here, an osprey had built its nest atop a bridge pier. While we crossed, the osprey flew away from its nest and perched itself a safe distance away from us, on a nearby tree branch.

The eight miles of ups and downs to our first campsite felt very long on this day. Toward the end, I started walking at a brisker pace, desperate to rest my feet.  Suddenly, what I believed to be a rattlesnake hissed at me from a shrub.  It was coiled, and its head loomed eerily toward me.  I sprung quickly away from it, and Stephanie (behind me) found a different route around the snake.  I later questioned a ranger at Tetons about the snake.  He said it could have been a rattlesnake, but it might also have been a bullsnake, which has learned to imitate the rattlesnake to scare away potential predators.

At long last, we reached our home for the night, a nice site along the river. Gray skies rolled in as we rinsed in the river and watched our marmot neighbors.  Before long, it began raining and we retreated to the tent for a nap. The rain never ceased.  We spent the evening playing cribbage until we tired enough to tuck in for the night. When we woke in the morning, the rain still fell.  We slept in until it stopped, then hiked 4 miles back the way we had come, to our second night’s campsite. On this hike, I noted snow up in the mountains that had not been there on our way in. Fresh snow on the mountain – Yellowstone

I liked our second campsite better than the first. It, too, was situated along the river, but it was more surrounded by mountain peaks and beautiful rock walls. As we had a lot of free time this day, I walked around with my tripod taking pictures of plants, creeks, and an old NPS cabin.

Standing near a bridge that went over a creek, I was taking pictures of a pink flower when suddenly a fox appeared on my left on the trail!  It had stopped dead in front of me, and looked at me as if quite shocked and unsure what to do. After a few moments’ hesitation, it circled around me through the brush, much like Stephanie avoiding the “rattlesnake”. Returning to the trail on my right, it ran swiftly across the bridge. During these few moments, I was as shocked and unsure as the fox. I tried to snap a picture, but my camera was on the tripod and set for taking close-up photos of flowers. I managed to capture a couple of bad photos of the fox. Not five minutes later, I saw the fox run back the way it had come, this time with a fresh kill in its mouth.

Despite not wanting to leave this awesome campsite, we awoke at 5:00am the next morning to hike out. For the next two days, we decided, we would do the “touristy” things. I truly am glad that so many people get to enjoy Yellowstone, but I cannot stand how crowded the hot spots get. I highly recommend waking up with the rising sun in Yellowstone.  That way, you get at least a few hours of uncrowded viewing of thermal features.

Day one as tourists, we visited Mammoth Hot Springs and Norris Geyser Basin. Both were quite amazing. At Mammoth, we saw a small black bear in the distant trees.

Both Mammoth and Norris were impressive, but I was most awed that day by our afternoon hike to the brink of the Lower Falls. The Lower Falls is easily the largest waterfall I’ve yet to see in my life, and to stand at the brink of it was both terrifying and magnificent. The water fell with such speed, and then falls 308 feet to the bottom where the splashes and mist look almost like smoke.

Brink of the Lower Falls – Yellowstone

Beyond the base of the falls, the Grand Canyon of Yellowstone stretched in front of us: a grand sight indeed. We then hiked down to Lookout Point to view the falls from afar. 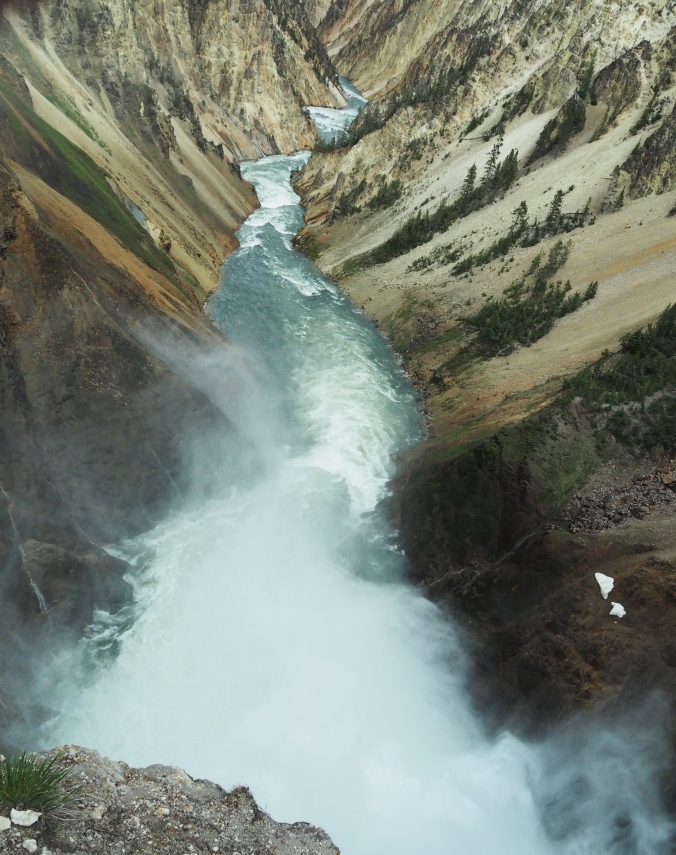 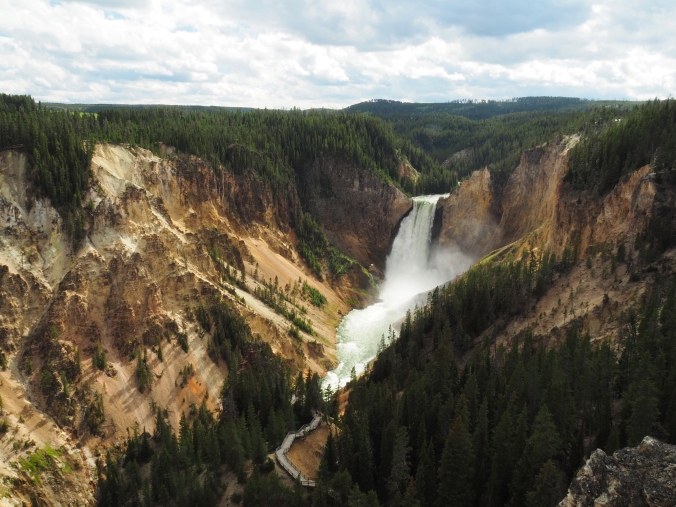 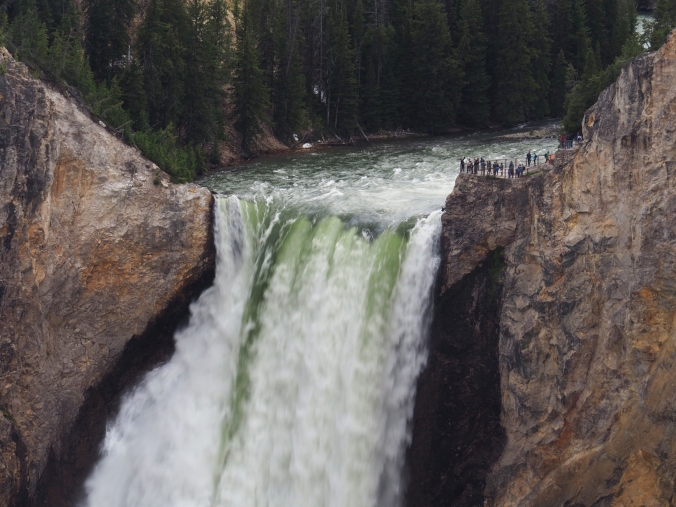 That night we finally got our showers. We also paid more for a campsite than we had as of yet, but it was worth it not only for the shower, but for the ability to get up early to beat the crowds on tourism day two. On this day, we only made it until 11am before the density of crowds sent us sprinting away from the geysers.

It was nice to visit Old Faithful early in the morning. After its eruption, we got held up for some time checking out the historic Old Faithful Inn.  It is such an impressive building, especially considering it was built in winter of 1903.  The unique lumber shapes for the building were found in the park and had to be hauled to the location using horses and sleighs.

First visit to Old Faithful for Oobee and Stephanie 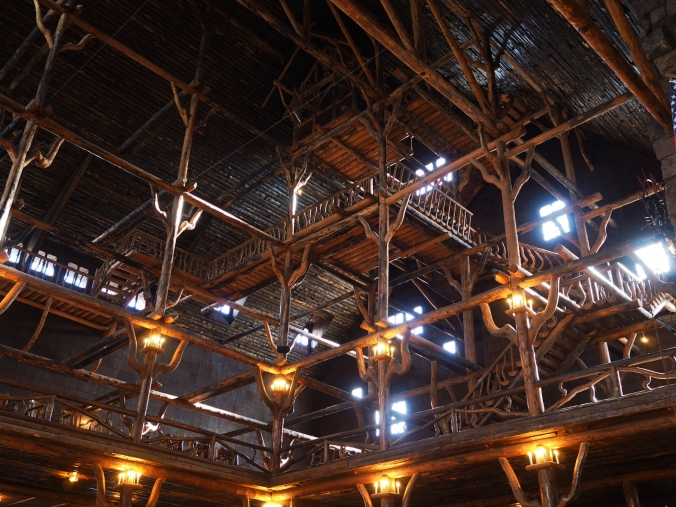 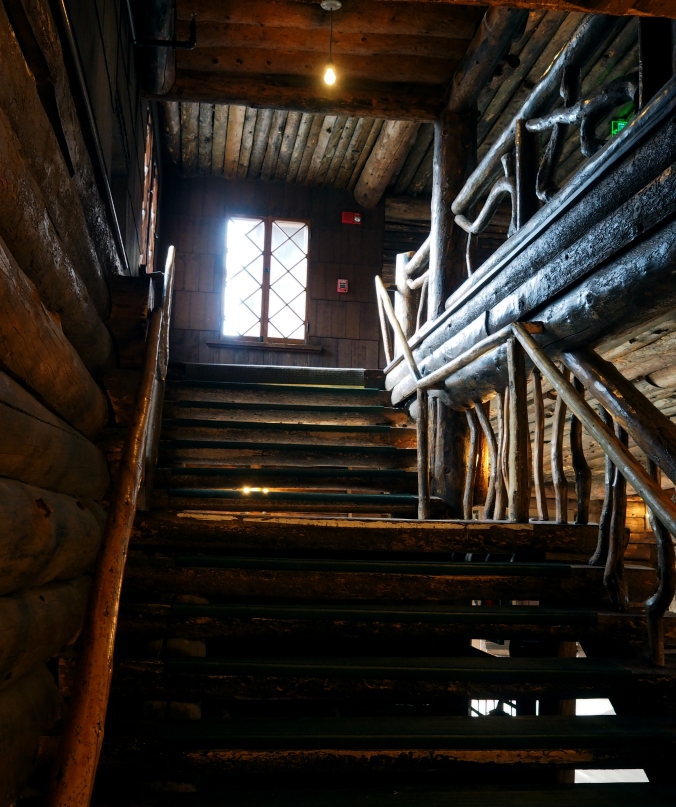 After Old Faithful, we stopped at Biscuit Basin, which included many colorful thermal features. 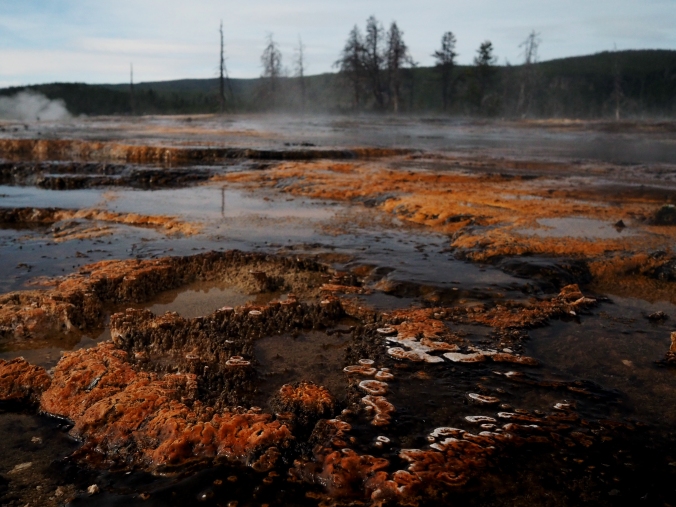 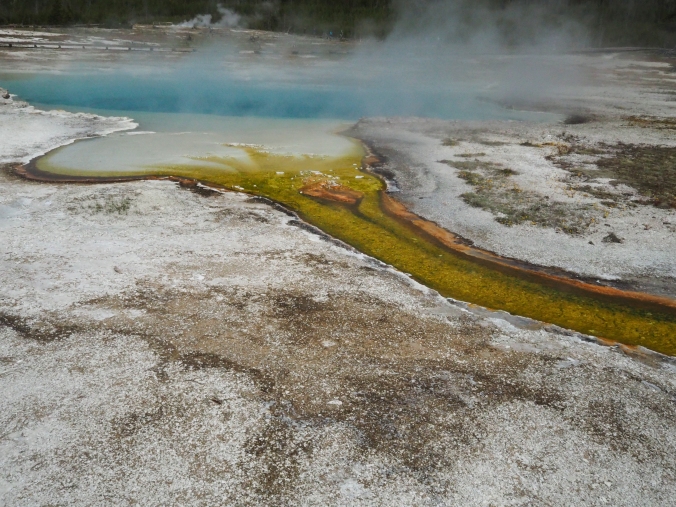 Next, we stopped at middle basin which includes the famous Grand Prismatic Hot Spring. The crowds at Grand Prismatic were unprecedented. The impressive spring made it worth it, but it also drained our energy for crowds for the day. 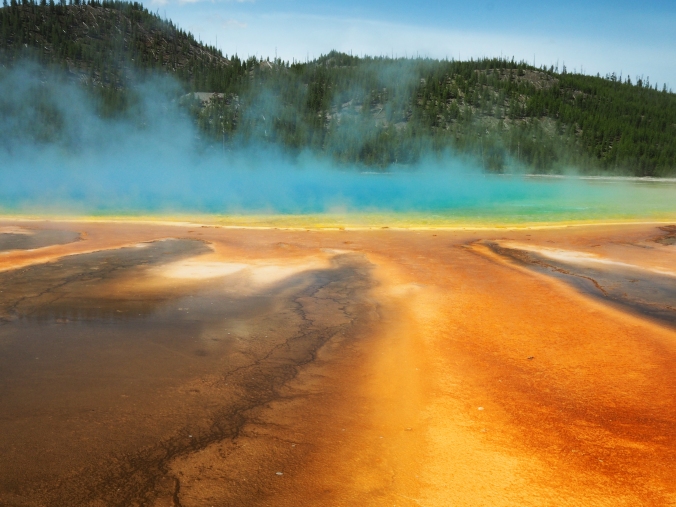 We went for a bike ride and then headed for West Yellowstone for our last night at the park. In West Yellowstone, amongst all the “old west” shops and restaurants, there is a tiny antique store owned by a great couple.  I highly recommend stopping in to see if anything tickles your fancy.

After blazer camping in West Yellowstone, we drove back into the park, headed for Grand Teton National Park. It was sad to say goodbye to Yellowstone, but we were excited for what was ahead.

Along with the many critters we saw while hiking in Yellowstone, we also saw many animals while driving—most notably: bison, elk, and a moose. We’re not the type to get out of our cars to photograph wildlife. Personally, I prefer natural encounters with the beasts. It was still cool to see my first moose in the wild!  I am very thankful for those who had the foresight to preserve this place, not just for us, but for the animals.  In today’s world of industry and agriculture, places for wildlife to call home are few and far between.